Is ToR a Blessing? or a Curse?

Tor (The Onion Router) is a free software that enables anonymous communication. The core principles were developed in the year 1990 by Paul Syverson, Michael G. Reed and David Goldschlag, to protect U.S. intelligence communication. In its early stages the Tor project received most of its funding from the US Government. However, it was initially launched for research purposes in the year 2002 but in the later years, it gained a lot of attention from the users all around the globe as it was freely accessible and enabled anyone to chat and send instant anonymous messages to anyone. At present it is used by millions of users and mostly for the illicit purposes. The irony here is that Tor project was actually started for Military communication and to keep the messages safe by encrypting them, where anonymity meant saving lives.

The name is a metaphor as it uses the onion routing technique to keep the data from leaving any track. In onion routing the message that is transferred from one node to another is encapsulated into several encrypted layers, hence the name onion.

Or In simple words for better understanding:

The message passes through a relay of server nodes, which keep on bouncing the message from one relay node to another (where every single server node is located in a different part of the world) and it only reaches the destination on the decryption of its last encrypted layer. The anonymity is never disclosed as the relay nodes generate false IP addresses when you try to trace the track from where the message came. 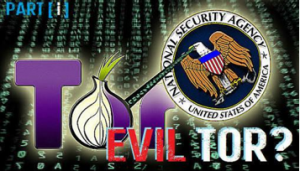 Some important points to remember while using Tor:

Don’t open the downloaded document through ToR:: Be very careful while downloading documents or any other files as these files may contain resources that will start downloading outside the Tor by some other application which is using them.

Use the Tor or not?

So what is the conclusion? Before deciding, just think about what you do online and what you want anonymity for. If you just want to cover your browsing history after watching porn or something, an Incognito mode is probably more than sufficient. But if you are a hacker or someone who wants to anonymity for any reason, then you can go ahead with Tor. So if you really want to be completely anonymous, use only Tor. No alternative is going to be useful other than Tor, because it is hard to argue about Tor’s convenience and security systems. After all, that’s the reason why Tor’s so popular. It’s good enough if you use it carefully and know how to navigate it. It’s a good anonymity solution.